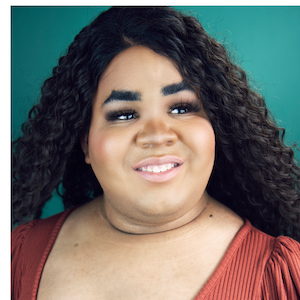 Based in Lubbock • TX

Blanca Del Loco is unparalleled in the breadth and versatility of their artistry, as a singer, dancer, and gender-fluid actor. Blessed with a luminous classical soprano voice, a powerful musical theatre belt, and an incomparable gift for dramatic truth-telling, they are at home on theatre and opera stages, appearing in over 20+ shows. In addition to their theatrical work, they maintain a career as a concert artist, having appeared with the Shreveport Symphony Orchestra as well as doing solo shows in their hometown. Born into a lower-class family, Blanca grew up in Shreveport, Louisiana and from a young age was drawn to the arts. Coming from a poor background, they received their first training from watching Great Performances on PBS and copying what they saw. By the age of 7, they were performing in their church's choir and school's choir. They went to the Renzi Art center throughout grade school and received most of their beginning training in dance and acting here. Aside from being a performer they also are a playwright and have had their work performed in workshops and staged readings. They attend Texas Tech University were they major in Theatre and Vocal Performance with a concentration in Musical Theatre and Opera. They have won awards at Lousiana Nats for Musical Theatre and at KCACTF for musical theatre dance and their performance of a 10-minute play, Revival, in which they originated the role of Zin. In addition to their educational and professional obligations, Blanca is a passionate advocate for equal rights, LGBTQ causes, and underprivileged youth. This summer they will Attend the Open Jar Institute in New York City for Musical Theatre. Aside from Musical Theatre, Blanca is a recording artist on all streaming platforms.