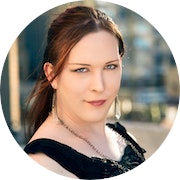 Anessa Marie is a composer/lyricist, music director, orchestrator, and performer based in New York City. In 2019, along with frequent collaborator Danny Bristoll, Anessa debuted Finding Beautiful, a new theatrical song cycle, as part of NYMF's 2019 season. Also in 2019, Anessa was chosen as the inaugural NYMF fellow and is currently developing Words Unspoken, a new full-length musical with Danny Bristoll. Other NYC credits as composer include Beautiful: the Music and Lyrics of Anessa Marie (April 2018) and A Glimpse of the Rainbow (June 2018). ​ Anessa also works as a music director/conductor in the theatre community of New York City. Credits include Miss Step (5th Ave Reading), Interstate (NAMT), The Office Musical Parody, Invisible in Concert (54 Below directed by Marc Kudisch), American Girl Live (Nat'l Tour), Elevator Heart (THML), Into the Woods (OOTB), City of Light (directed by Tony Award winner Cady Huffman as part of SHENYC Summer Theatre Festival), Lysistrata Jones (Ophelia Theatre Group), An Intolerant Vaudeville (The Secret Theatre), Frankenstein (St. Luke's), Fancy Nancy Splendiferous Christmas (NYC and National Tour). She also works regularly with NYU's Graduate Musical Theatre Writing Program in developing new work. As a transgender woman, Anessa is especially drawn to telling stories representing the underdogs in society. Anessa's goal is to give a voice to the unheard voices of today, in the hopes that tomorrow will lend a voice to those without presently. ​ Anessa is also a much sought after audition coach in NYC, and works closely with students to help them develop both performance technique and audition skills. She is the co-founder and co-owner of AnD on BrAnD, a training ground for actors and singers based in New York City. Her students have gone on to book shows on Broadway, Off-Broadway, and on cruise ships around the world. ​​ Available for commissioned work, Anessa specializes in composition for musical theatre, along with arrangements and orchestrations for all genres.