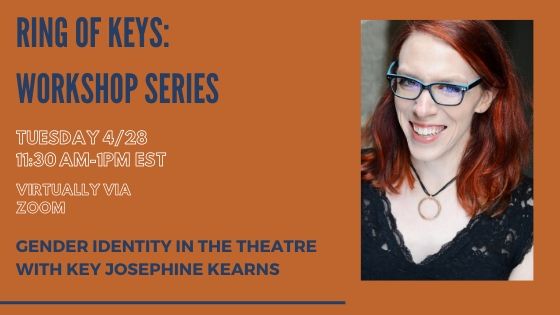 A 90-minute session talking about gender diversity in theatre. We'll talk through some language and terminology, discuss things to keep in mind when working on a gender diverse team, and share important tips for working on shows about gender diverse topics. Josephine Kearns (she/her) is a full-time Gender Consultant, specializing in queer, trans, and intersex identities for theatrical productions and is the Ring of Keys Consultancy Director. She has worked with theatres across the US and Canada, including Fifth Ave. Theatre, Kansas City Rep, Chicago Shakespeare Theatre, Guthrie Theatre, Shaw Festival Theatre, Village Theatre, and TimeLine Theatre, as well as multiple Broadway development projects. Josie regularly conducts trainings on gender for schools, hospitals, businesses, and nonprofits. She has also worked as a Program Coordinator for the gender program at Lurie Children's Hospital in Chicago, where she started a mentorship program for trans youth, and has consulted on gender-inclusive policies for many organizations, including Northwestern Memorial Hospital, Chicago Public Schools, the University of British Columbia, and the State of Illinois.